Put-in-Bay and Hospitality have been intertwined for over a century. Guests have flocked to the rocky outcropping in Lake Erie to relax, unwind and forget about their troubles. One of the most prolific and grand resorts to grace South Bass Island was the Hotel Victory. This year marks 100 Years since this legendary Put-in-Bay Hotel burned to the ground. 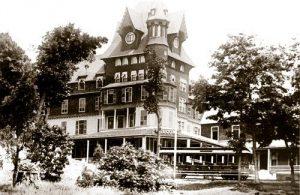 Just prior to the construction of the Hotel Victory, fire played a role in its development. During the 1870s and 1880s, South Bass Island began to flourish as a tourist destination. The primary crop grown was grapes, which became coveted island wines. A few boarding houses sprung up to accommodate the new guests to the island. One of the larger Put-in-Bay Lodging options, the Put-in-Bay House had over 1000 rooms. Sadly, it along with a few other smaller hotels succumbed to fires. Therefore, in 1888 a hotel shortage was prevalent on the island.

As the saying goes, when one door closes another opens. A business man, J.K. Tillotson realized the opportunity for a Put-in-Bay Hotel. He embarked on an ambitious fund raising effort attracting investors and selling stock in his venture. The vision was for a grand resort named in honor of Oliver Hazard Perry’s Victory. Initially, there was some difficulty securing the funds needed for the project. The completion date of the Summer of 1888 changed to 1889. Still, on September 10, 1889 the cornerstone for the building completed. The date was in deference to the anniversary of Perry’s Victory.

The building design was in a Queen Anne Style by renowned architect E.O. Falls. Plans called for impressive towers and turrets with many dormers and accouterments. The facade intended to awe arriving guests as they came to shore via steam ships. Construction work by the Feick Company of Sandusky spanned over a period of years. Costs began to escalate and doubters began to chime in loudly. Still, many remained optimistic and hopeful for the Hotel Victory potential.

After much doubt and speculation, construction completed in the Summer of 1882. On July 29, 1982 the Hotel opened with much excitement for the first guests on Put-in-Bay Ohio. An elegant fine dinner for an expectant crowd of 500 diners was delightful on opening day. 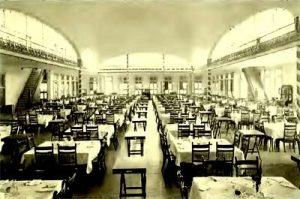 Ups and Downs with the Hotel

Indicators from the opening would have suggested a great success to come.  However, things did not end up going so smoothly.  First, in less than a year the hotel encountered financial distress and was placed in receivership.  Then, in 1889 the Stock Market crashed causing a drastic decline in tourism to Put-in-Bay.  Consequently, the Hotel Victory closed its doors in August of 1889.  Then, the hotel and grounds sat neglected for over 18 months.  The furnishings and building were finally sold at Sheriff’s Sale for a fraction of the original cost.

Surprisingly, the Hotel Victory reopened again in 1896.  A massive marketing effort helped to spawn a new wave of island visitors.  Also, the addition of a lake-fed pool sparked great interest.  This was the first co-ed pool in the country and made quite a splash with the local media.  Still, this was not enough to keep this massive resort afloat financially.  Additionally, a smallpox scare in 1898 set back the operation even further.  Twenty six employees of the Hotel Victory had succumbed to the disease and were quarantined.

Once again the Hotel Victory changed hands, as the owners didn’t want to deal with any more strife.  In 1899, C.W. and J.W. Ryan, successful hardware merchants, purchased the property.  They hired Thomas McCreary as the Hotel Manager.  He was well known for being an excellent host and went about bringing the resort back to its glory.  By the opening of season in 1900, the Hotel Victory was ready.  From 1899-1907 the Hotel Victory saw its greatest success and popularity with McCreary at the helm. Moreover, his attention to detail, range of activities and overall presentation set the Hotel Victory apart from cheaper alternatives.

Sadly, McCreary passed in 1907.  Still, he is the longest standing Manager of the Hotel Victory.  Also, he was responsible for commissioning the stunning Victory Statue.  This 13 foot tall statue of bronze and copper graced the front of the Hotel.  Unfortunately, the grand statue is no more as it went to the scrap metal drives of World War 2.

The Final Years and the Fire

After McCreary passed, no one could match his presence.  Again, the hotel closed its doors in 1909.  Sitting idle again for a couple of years, a Chicago paper lamented the building looked haunted.  The hotel changed hands a few times before retaining ownership with the Flanders Realty Company of Detroit.  After another large scale renovation, the hotel reopened in 1918.  Now, the hotel focused on hosting conventions and touted the resort as a good place for soldiers to go on leave.  Traffic began once again to flow to the Hotel Victory.

Charles J. Stoop of Chicago obtained the Hotel Victory after assuming a $250,000 loan in the latter part of 1919.  He had high hopes of promoting and filling the vast resort. However, he would be the last owner of the original hotel by this name. At least until recently when the Victory Station Hotel opened its doors downtown.

On Thursday August 14th 1919 there were just a few guests staying at the Hotel Victory.  Suddenly, a phone rang into the hotel alerting staff that a fire had sparked on the third floor.  Quickly, the fire spread throughout the massive structure.  The Put-in-Bay Fire Department raced to the scene.  However, they realized they were outmatched for such an immense blaze.  The pumped in water from Perry’s Cave and used chemical pumping trucks, but they could only contain the flames.  Sadly, the building was a loss.  To add insult to injury, thieves looted much of the grounds, taking furnishings and such from the damaged building.

Rumors swirled that the fire was set intentionally for insurance money.  However, after closer examination, it was determined there was little insurance and a great loss to the financiers.  In reality, many believe faulty wiring was to blame.  So, after a tumultuous history full of ups and downs, the Hotel Victory was no more.

Remember 100 Years After the Fire 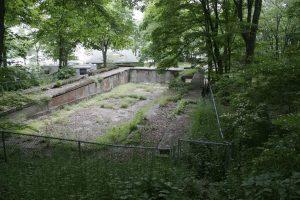 A reception is planned to pay homage to this legendary island institution.  Today, the ruins of the Hotel Victory can be viewed on the ground of the South Bass Island State Park.  Here, the reception will feature speakers and enthusiasts interested in this storied past. This reception is held in conjunction with support from the Lake Erie Island Nature and Wildlife Center, South Bass Island State Park and other Island Businesses.