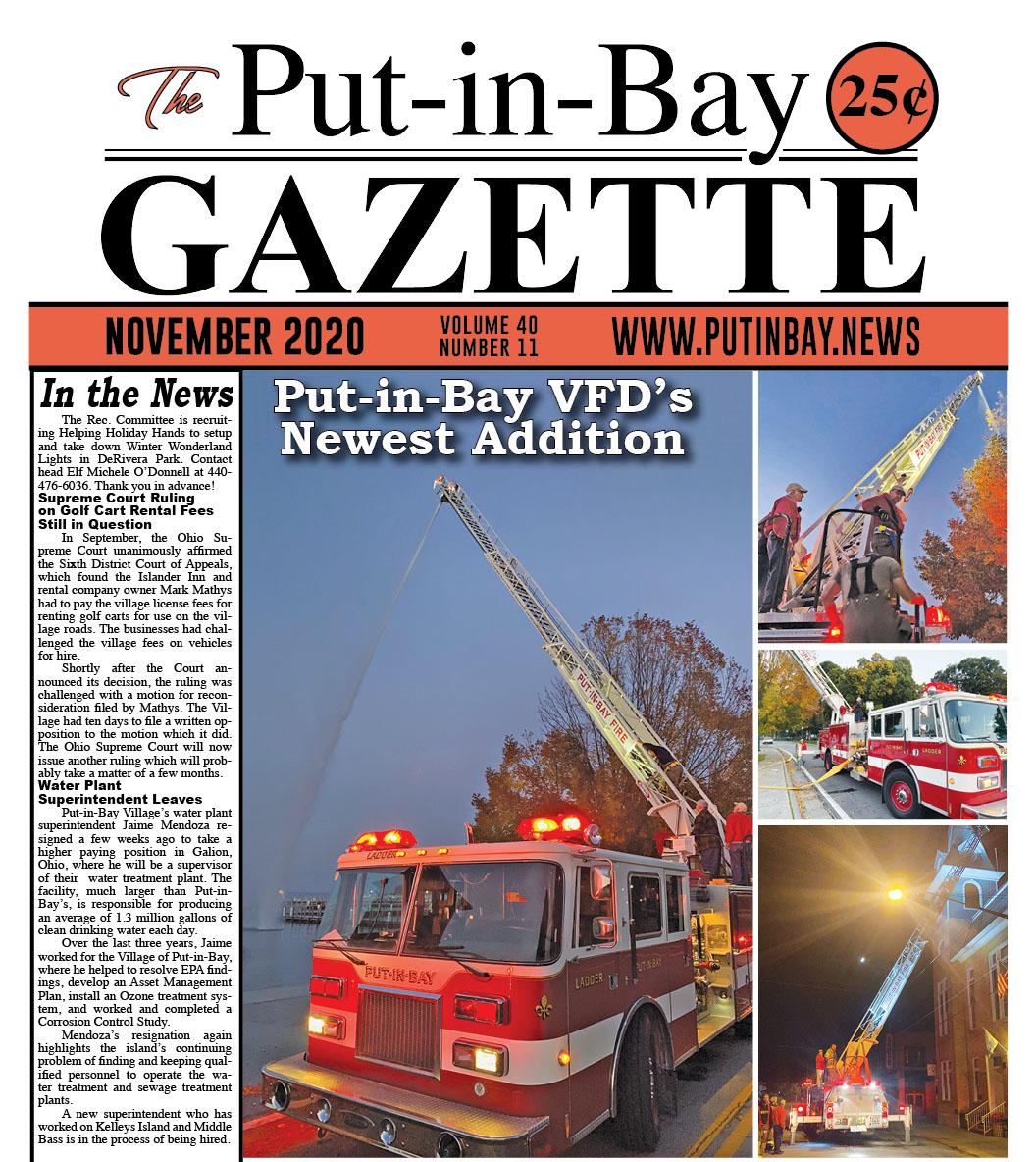 Congratulations to Barb Chrysler who was awarded the Inter-Lake Yachting Association’s 2020 Commodore Award for her years of commitment and hard work she put into the organization’s success. Barb retired this fall from the Put-in-Bay Yacht Club after several years of being manager there.

The Lake Erie Islands Conservancy loves their volunteers! This past month, Joe Byrnes and Jacob King cleared the trail at the Massie Cliffside Preserve of downed trees and Joe and Mike Byrnes removed downed trees at the Coopers Woods Preserve. Talii and Doug Steidl continued to mulch the Jane Coates Wildlife Trail. Julene Market wrote thank you notes and Linda and Joe Shull prepared membership boxholders!! What a great team!!

It’s hard to believe, but the Perry Holiday turned 35 years old this year, the Kruegers bought the old fire station building 25 years ago, Bay Lodging was built 25 years ago, and the Put-in-Bay Gazette is finishing up its 40th year of publishing. It’s also hard to believe that St. Hazard’s on Middle Bass is 25 years old.

ATVs on the Road Again

On November 1st, islanders were allowed back on the island roads with their ATVs. They can be used on the roads for the next six months.

We’re sad to have to say goodbye to Judy Ruggiero from Mike’s Drive on East Point. She has sold her home on East Point and is moving to Girard, Ohio. Bill and Jennifer Reinheimer sold their cottage on West Shore to Brian and Lynn Kezur and depart after many years as summer residents.

Several island groups have approached Village officials to allow some of their group activities to be held at the Town Hall. Officials have been reluctant to allow the groups to do so because of sanitation issues associated with Covid. The Village Council and the Zoning Board still have their meetings there, plus some offices are still being used out of necessity.

ODNR officials are contemplating tearing down the My Aunt Irma’s building at the Middle Bass Island State Park. The Gazette has learned feelers have been put out by park officials about tearing down the building that is located on the east side of Fox Rd. just north of J.F. Walleye’s. The relatively new and well-built building has not been used in the last few years.

Running for a Cause

Emily Beal and Jackie Taylor have decided to run 10 miles on Saturday morning, November 14th, on Kelleys Island, to raise money to sustain the island’s Pollinator Habitats. Help them reach their goal with a donation! You can call Jackie at 419-279-3199. They will start and finish their run at the Kelleys Island State Park!

A number of years ago, Mother Mary Staley planted some grapes in the backyard of St. Paul’s to see what would happen. This year was the best grape harvest yet maybe because Pinky Batt helped her do the trimming last winter. She decided to make a batch of jelly, which she’d never done before in her life. She says it came out much better than she thought it would and added she learned a lot. Although it tasted pretty good, it was a little more work than she anticipated, and she doubts she’ll try it again.