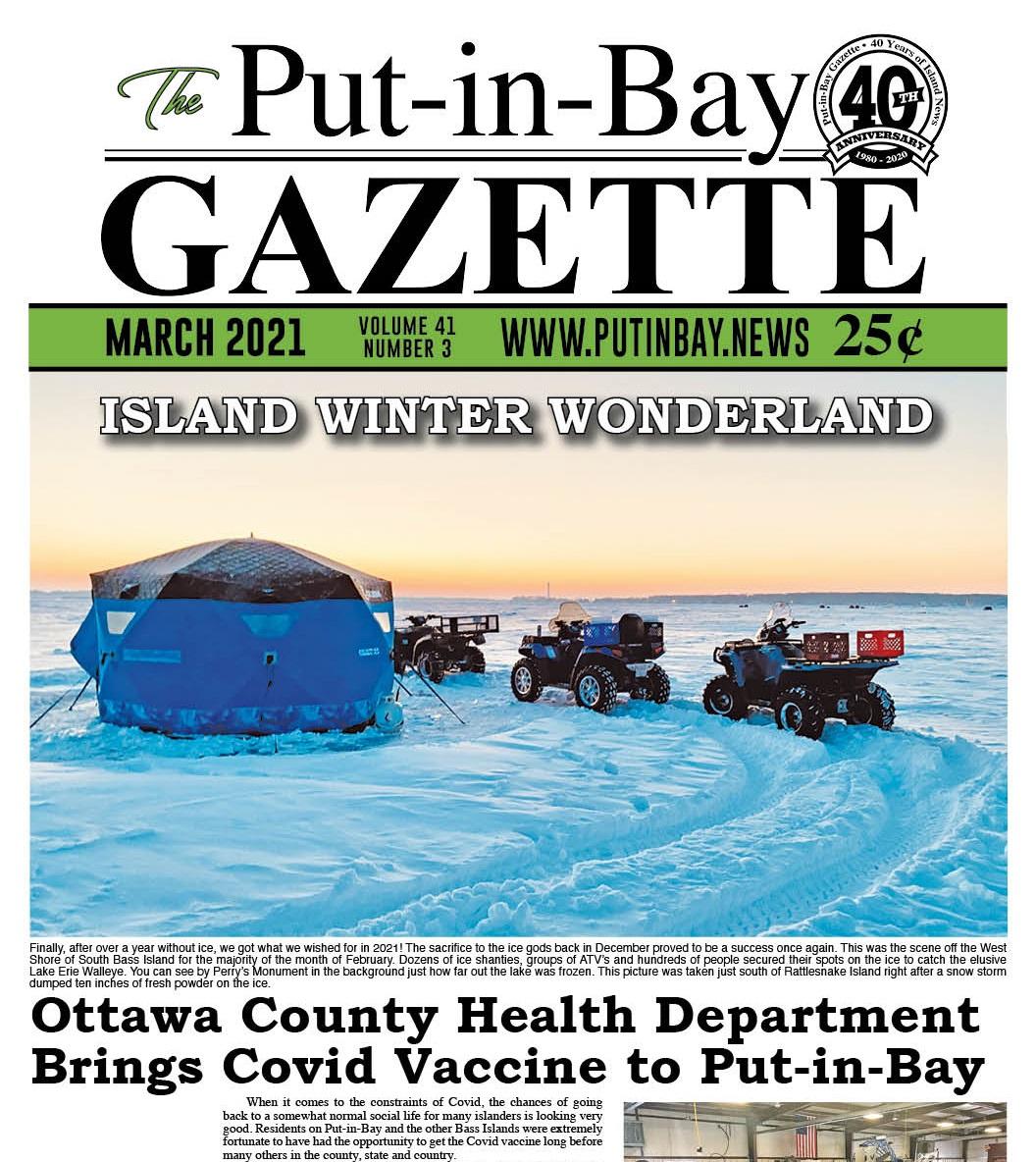 At the end of January the Village of Put-in-Bay announced it was searching for a permanent police chief. A few days later, Mayor Jessica Dress told Council members that she had received 30 applications. The number increased to 45 just days later.  Put-in-Bay has had an interim chief, James Kimble, since the end of last June. He is among those seeking the permanent position. Dress and a committee consisting of President of Council Judy Berry, Put-in-Bay Township Trustee Matt Miller, Mark Hummer and Matt Mariano from the PIBPD, and a representative from the Ottawa County Sheriff Department conducted interviews in February. Dress is expected to make a recommendation for the position at the March Village Council meeting. Council must vote on approval of her candidate.

Covid had a huge impact on the 2020 season at Put-in-Bay, but things are looking a lot better for this coming season. Social media is alive with date announcements for many events, plus Covid numbers, thanks to vaccines and other factors, seem to be heading in the right direction for getting back to a normal-like season. Dates have already been announced for Spring Fling, the Island Wide Garage Sale, Art in the Park, New Year’s at the Bay, PIB Jeep Invasion, the I-LYA Sailboat Regatta, Pyratefest and the Put-in-Bay Road Race Reunion, among others.

Last season, the Jet Express did not offer service to Kelleys Island and Sandusky. Two prevailing issues forced management to pause operations: Covid and the high lake water level causing dock flooding. With both Covid and lake levels trending down, it appears things will return to normal.

The Put-in-Bay Browns Backers Draft Day 5k will take place on Sunday, May 2, 2021. Information about the race that will be in person as well as virtual can be found at the registration link on the race website: https://draftday5k.itsyourrace.com/event.aspx?id=5254

St. Paul’s Episcopal Church at  Put-in-Bay continues collecting pull tabs for Ronald McDonald house in Cleveland.  Fifteen five-gallon buckets have been delivered to them. Bucket number 16 is almost full, so save those pull tabs and drop them off. No bag is too small.

Not a Bad Idea! Reflective Tape on Fish Shanties

Chris Cooper posted a very good suggestion for safety on the ice – Ice shanties should have strips of reflective tape on them so they can be spotted at night. When the EMS made a run at night to Middle Bass on the fire department airboat last month, it was difficult to spot the ice fishing shanties. Nothing serious happened, but it would certainly have been better if the shanties could have been spotted sooner. Something else happened on a lake in Michigan that could happen here. A snowmobile crashed into a shanty and killed the fisherman inside. Perhaps if there had been reflective tape on the shanty the snowmobiler might have spotted it and avoided the crash. Remember, it’s all about safety when you’re out on the ice!

Miranda Krueger, the daughter of Carl and Chris Krueger who own Mojito Bay, is launching a new business this season. If all goes well, she’ll have a floating tiki that people can reserve for a little fun on the water.  She’s had a lot of positive support since getting the word out about her venture! The plan is to have people make reservations to rent the floating tiki for fun on the water.

Quote of the Month

Heidi Ziegler Ladd posted this on the snow emergency day when people weren’t supposed to be driving and PIB School was closed.

“Another reason to stay off the roads today…all of the island high schoolers will be out playing on 4-wheelers and snowmobiles.”