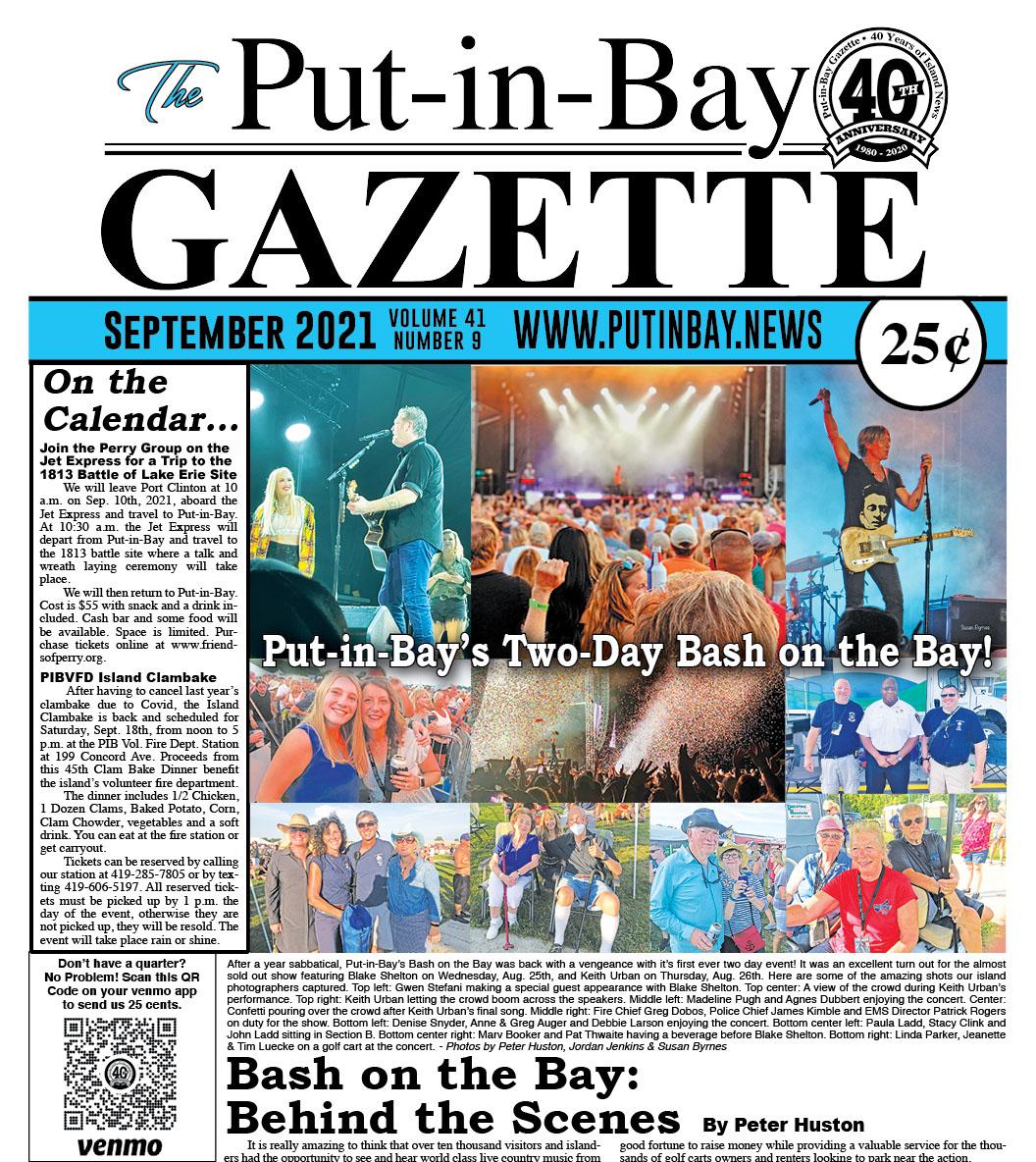 putinbay.com is proud to present the Put-in-Bay Gazette’s Island Diary. For the best South Bass Island journalism, visit putinbay.news and subscribe to the Gazette today!

Miller Ferry was chosen as one of the World’s Greatest! The boat line that serves the Bass Islands will be featured on “World’s Greatest TV” Sept. 4th & 11th at 3:30 p.m. on Bloomberg Television (DIRECTV Channel 353, DISH Channel 203, Local Cable Bloomberg TV). World’s Greatest brings people, places and companies into the spotlight with footage and interviews with some of the most amazing and unique companies, products, people and travel destinations the world has to offer.

Calling All Artists, Creators and Crafters!

There is still availability for vendors who want to take part in Art in the Park 2021 in DeRivera Park on September 11th! This is a great way for artists and craftspeople to display and sell their original work. Shoot the PIB Chamber of Commerce an email to coordinator@visitputinbay.com for more information.

There will be a shoreline cleanup on September 14 from 10:30 to 11:30 a.m. in the downtown PIB area. Meet on the concrete pad just to the east of the water taxi docks at the Boardwalk. It will be the last one for the season and since it is occurring in September, it will count for the International Coastal Cleanup, a worldwide cleanup initiative!

Cool Thing At The Bash On The Bay

A really cool thing happened at the Bash on the Bay when Keith Urban was on stage. Keith picked out a young kid in the crowd, asked him some questions and found out that it not only was it the kid’s first Bash on the Bay, but also his first concert ever. Keith asked him his name (Tristin), signed the guitar he had been playing and, to the surprise of all, gave the guitar to the youngster. Wow! And thumbs up to Keith Urban for a classy and priceless gesture!

A Public Service Announcement for Boats from DeRivera Park B-Dock

Just a public service announcement. Your phone driving system is for cars its goal is to get you to a road. Using it in your boat is a terrible idea. I know of five boats that hit Buckeye Reef this week. Two are confirmed to have been using their phone to try to get them here. The bill for towing you is far more expensive then an appropriate marine GPS with correct charts. Thank you. Return to your boating.

At the August meeting of the Put-in-Bay Property Owners Association, a card with all the logos and phone numbers of the rental cart agencies on the island was passed out. If you see someone acting up, you match the logo (and hopefully get the number on the cart, too), look at the card and call the appropriate number to report what you saw.

When Mack McCann was a young bartender at the Round House just over 60 years ago celebrating the end of the season on Labor Day night, he was instrumental in starting the “White Spider” tradition along with Cotton and Doris Duggan, Ed and Ethel Market and others. The tradition involved pouring a mix of all the clear liquors in a bucket and then tossing your coin into the same bucket from which you then took your drink. The name “White Spider” lives on, but the tradition isn’t exactly the same.

Empty Bowls By The Lake invites you to join the Bowl Painting Party scheduled for Monday, September 13th, from 4 to 7 p.m. at the PIB Vol. Fire Dept. station. The event is sponsored by The Butterfly House (bowls and glasses), Frosty’s (pizza) and Island Beverage Center (drinks). All are welcome. Please wear a mask.

International Day of Peace will be celebrated at Perry’s Monument on Tuesday, September 21st. World Peace Day was established in 1981. The park’s international flag collection will circle the three flag poles and create a large peace symbol visible from the observation deck.

Bob Reynolds, the grandson of the founder of Matthews Boat Works, is a frequent visitor to Put-in-Bay and tells us a selection of his watercolors, prints and note cards will be featured at an Art Show in Port Clinton at TAG (317 West Perry St.) on Saturday, Sept. 18th, from 11 a.m. toto 3:30 p.m. There will also be a viewing of a film about the maiden voyage of the “Onward,” a boat built by his grandfather and the first boat to complete the 9,000-mile Great Loop in 1905. The Great Loop is down the Mississippi, through the Gulf of Mexico, around the tip of Florida, up the East Coast and then via the Erie Barge Canal to Lake Erie. At the end of the film are photos taken when the “Onward” stayed at Put-in-Bay for a week.