Rising 352 feet into the air of Put-in-Bay, Ohio, Perry’s Victory and International Peace Memorial is a powerful symbol of everlasting peace. The massive Doric column, is a column with a simple circular capital on top, completed construction in 1915. It recently underwent a series of repairs and reopened in 2006. Perry’s Monument is among some of the tallest monuments in the United States. In fact, only the Washington monument stands taller.

Perry’s Monument stands tall to remember those who fought in the War of 1812. Commodore Oliver Hazard Perry and his men, despite being outnumbered, gained control of Lake Erie. Visitors from Cleveland, Sandusky, Michigan and even New York come to see Perry’s Monument. After all, it is one of the nation’s best kept national monument secrets and one of Put-in-Bay’s top attractions! 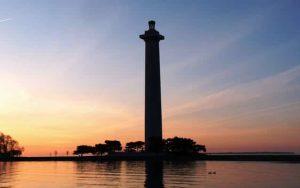 Visitors pay an admission fee to access the observation deck near the top of the column. A park ranger escorts them via elevator to the top. A 37 step walk also leads to the visitor’s center. Once at the visitor center, you can learn all about the Great Lakes and their vast history.

Park Rangers are on hand to answer any questions visitors may have and inform them of the history of this column. Visitors can gaze along the longest undefended border in the world, a five-mile stretch between Canada and the United States.

This monument is the only international peace symbol in the National Park Service (NPS). It stands 47 feet taller than the Statue of Liberty. Its observation deck 12 feet higher than the Lady Liberty’s torch.

Buried at the base of the column are three American and three British soldiers. Both British officers and American officers are also remembered onsite. The names of all the soldiers slain in the Battle of Lake Erie are also carved inside the walls of the rotunda. The construction was a multi-state effort to “inculcate the lessons of international peace by arbitration and disarmament.”

“Don’t Give Up The Ship”

Severely outnumbered during the Battle of Lake Erie, Naval Commander Oliver Hazard Perry and his troops held fast against the British fleet. His famous line “don’t give up the ship” is now memorialized on souvenirs and flags throughout the island.

Perry’s monument is part of the fabric of the The Lake Erie Islands, and is a very special to Put-in-Bay in particular. Commodore Perry was able to use the unique terrain of South Bass Island to win the Battle of Lake Erie.

Sue R: “In addition to being impressive, Perry’s Victory Monument offers beautiful views of the islands surrounding Put In Bay. I hadn’t realized that this is a National Park. After going to the top of the 317 foot tower, we visited the museum which is close to the property. They offered a 15 minute movie that gave you the historic significance of Lake Erie and the battle that the Peace Memorial commemorates. The entrance is only $7 per person and it’s good for a whole week. The visit is well worth your time and the history behind it is something most of us never learned in school.”

David W: “ A visit to this excellent historic site is worth the effort. The movie and excellent museum displays tell the story of the Battle of Lake Erie, which changed the course of the War of 1812 and ensured that Michigan, Wisconsin, and other northern territories would be American, rather than British soil. The staff is enthusiastic and helpful in making visitors of every interest level feel welcome. This great place is worth a visit for so much more.”

Lisa P: “I was glad to finally get to the top of the monument as it has been closed for repairs the last couple of times we went to Put-In-Bay.  I was surprised that it only cost $7 for those over 15 years old and the ticket is good for 7 days, so it is very reasonably priced. The staff is very knowledgeable and very friendly.”