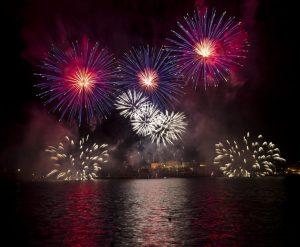 Join us in downtown Put-in-Bay every year on the 4th of July at dusk for the annual fireworks show. Put-in-Bay businesses get together to sponsor this great display of pyrotechnics downtown in the harbor. Grab a seat on the lawn of Perry’s Monument or if you are lucky, sit at the Keys at an outdoor table. Fun for the whole family!

While fireworks may seem like a very American tradition, especially on the Fourth of July, their origins go back centuries before the first Independence Day fireworks display in Philadelphia in 1777.

The earliest forms of such pyrotechnics can be traced to around 2,000 years ago in China. During the Han Dynasty in 200 B.C., people are said to have roasted bamboo stalks until they would turn black and sizzle, and the air inside the hollow stalks would explode. “Baozhu” is a Mandarin word for firecracker that translates directly to “exploding bamboo.”

Chinese history experts say that at some point between 600 A.D. and 900 A.D., Chinese alchemists took that idea to the next level by filling bamboo shoots with gunpowder made from saltpeter (potassium nitrate, sulfur, and carbon acquired from charcoal), and throwing them into a fire pit. Steel dust or cast-iron shavings were added to make them sparkle. Another recipe for Chinese fireworks published by the Paris Academy of Sciences in the 18th century reported that “Chinese fire was made by crushing old iron pots and scraps into sand and adding the sand to gunpowder.” These firecrackers were often used during New Year Festivals and weddings to scare off evil spirits.